I had the dubious distinction of being granted an interview with the Meatgrinders before their upcoming show and book launch on Friday, December 13, 2013.  Having only known Yowza and Deadwait since their time in Berlin I thought it was important to trace the legend back to it’s origins, Australia.

You’re both Australian – did you know each other before moving to Berlin?
We used to work together at a bar in Melbourne and painted together and made out a couple of times, but never really got to know each other until Berlin. We spent an hour in a park, drank a bottle of jager and went and got our nipples licked by some of our gay lady friends at a bar in Friedrichshain. That was when we knew we had a special relationship.

How has moving to Berlin influenced your artistic practice?
We don’t have to work a shit job to pay rent, so we can draw constantly. We’re surrounded by super art fags, so we are always being pushed to do better. We don’t speak German very well, so we can’t understand the criticism of our work. Beer is sold everywhere. It’s perfect for us.

What/who influenced you?
We bite our style off everyone that we can. Too many to name really. We influence each other by telling each other how good we are. Constant ego stimulation is the biggest influence.

When did you start collaborating?
I guess the first real collaboration was when we carved MG into each other backs with a red hot butter knife. We wanted to make sure our dedication never wavered.  Meatgrinders for life and death. So it goes.

How long have you been drawing, painting and tattooing?
The Meatgrinders are one year old. So one year. 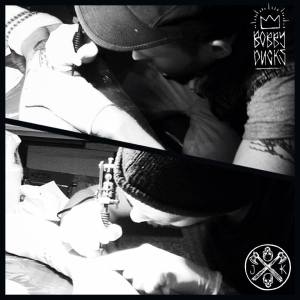 It’s interesting how your work fits together – your styles are very different but also quite complimentary. When was the collaboration of the Meatgrinders born?
We started painting the walls for our first exhibition 4 days before it opened and only then realised how good we work together. We seem to set our goals within an unrealistic time limit, but somehow always pull it off. We put together a 32 page magazine, with nearly all new work in under two weeks. That nearly killed us, but we killed it first.

Your first exhibit together was this summer at ReTramp gallery in Neukölln, you set the bar pretty high. You took over the space and welcomed people into the Meatgrinder’s universe – is it more accurate to call this an exhibit or a portal into said universe?

Exhibitions can be boring, so we wanted to make it something that people got excited about. A window into the world of the brain parasites that we live with every day.

Friday the 13 is the perfect date for your exhibit – did, in fact, the day choose you?
We tried to have it earlier, but like Jason coming to take your prom date into the next world with a machete and a smile, Friday the 13th is the perfect end to the year that the Meatgrinders were born.

For more Yowza check out Facebook, Carrion for Breakfast, or here for tattoos.